“De Rossa Wins, Dublin Wins” a large leaflet from Proinsias De Rossa of the Workers’ Party from the 1989 European Elections in Dublin. De Rossa was elected.
Many thanks to the sender.

END_OF_DOCUMENT_TOKEN_TO_BE_REPLACED

After another poke around on the Wayback Machine…….. The Democratic Left website from November 1998, a few months before the merger with Labour.
There is a section on its Objectives, its ‘people’, press releases and policies.
Click HERE or on the image to enter the site.

Not all links on the site may work.

From the 1989 General Election a leaflet for then Workers Party Councillor Eamon Gilmore. There is also a request to vote for Prionsias De Rossa in the European Elections that were held on the same day.
Gilmore was elected as The Workers Party won 7 seats (a gain of 3). De Rossa was elected also.

END_OF_DOCUMENT_TOKEN_TO_BE_REPLACED 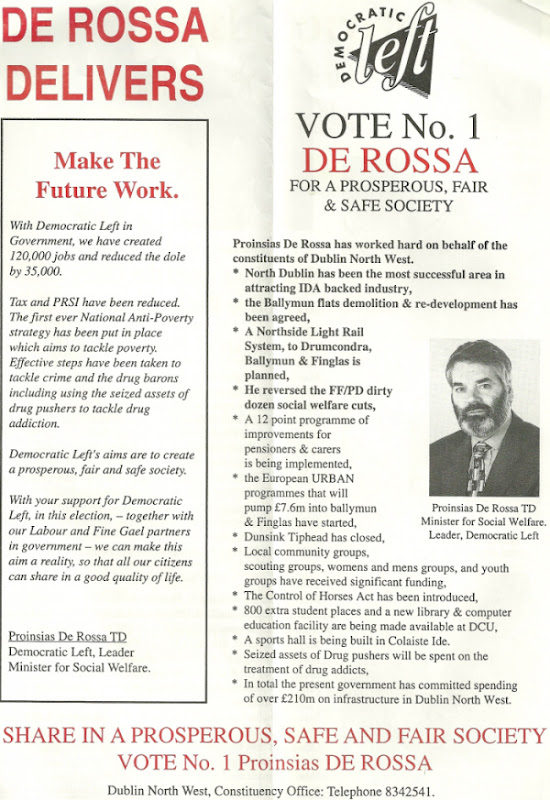 END_OF_DOCUMENT_TOKEN_TO_BE_REPLACED

From the 2004 European Elections in Dublin. Labour candidates Proinsias De Rossa and Ivana Bacik. DeRossa was elected.
From the blurb Proinsias DeRossa must have been very busy in Brussells.

END_OF_DOCUMENT_TOKEN_TO_BE_REPLACED

The 1989 Euro elections, a breakthrough as Proinsias DeRossa wins the seat. The style and content of this leaflet was refered to in ‘The Lost Revolution’. The centrepiece where he has the three people was novel at the time.
“Sean is from the Southside ..Dolores is from the Northside..” I wonder where they are now?

Also the leaflet is addressed to my family rather than to each of the then 5 voters in the house. Similar for the Workers Party General election Candidate, probably illustrates how tight funds were at the time.

END_OF_DOCUMENT_TOKEN_TO_BE_REPLACED

This is a joint document from the 1997 Rainbow Government. Highly unusual that 3 parties have a joint platform for an Irish General election. For the odd referendum you may find a common leaflet but certainly for a General Election its fairly Unique.

Their 21 goals for the 21st Century are spelt out as are their achievements in Government to date. Some nice poses from the three party leaders too.

END_OF_DOCUMENT_TOKEN_TO_BE_REPLACED

A well produced booklet for the 1997 General Election. The Democratic Left had been in government for the previous 3 years as part of the Rainbow Coalition.

END_OF_DOCUMENT_TOKEN_TO_BE_REPLACED

Democratic Left – No to Maastricht … but Yes to Amsterdam (when they were in Government) September 14, 2009

For the Maastricht Treaty the Democratic Left were dead set against it ……..    They were in the Rainbow government for the Amsterdam Treaty and sure it was a great Treaty altogether.

‘Why There is No Alternative to Reconstitution’ -Workers Party Discussion Document February 1992 (pre DL split) September 10, 2009

It’s language is very much of the dogmatic variety and spells out the direction they want the Workers Party to move in. It also indirectly makes reference to the existence and activities of the Official IRA mentioning ‘unlawful activities in the North’.
The split occurred after the special conference with 6 of the 7  TDs as well as a majority of the parties other elected representatives going off to form a group initially called ‘New Agenda’ which became the ‘Democratic Left’. The Workers Party continued on.