“Labour To Power- Break The Coalition And Fight For A Majority Labour Government” A Militant Pamphlet by John Throne -November 1975 July 24, 2020

“Labour To Power – Break The Coalition And Fight For A Majority Labour Government ” a Militant Pamphlet by John Throne from November 1975. The pamphlet opposed Labour’s  participation in the 1973-1977 Coalition Government with Fine Gael.
It’s 15 pages, so I’ve scanned and uploaded it in pdf format here
Many thanks to the sender

“Officials Will Not Replace The Labour Party” from Militant January 1975 March 13, 2017

From the January 1975 issue of Militant an article “Officials Will Not Replace The Labour Party” . Click on the image to enlarge or
here where I’ve uploaded it in pdf format

1991 Youth Rights Campaign flyer for a “Weekend of discussion and debate” on “Are Socialist Ideas Relevant To Youth?” June 10, 2015

From (I think) 1991 a flyer from The Youth Rights Campaign (which i presume were connected to Militant Labour) advertising a “Weekend of discussion and debate” on “Are Socialist Ideas Relevant To Youth?”
Many thanks to the sender.

END_OF_DOCUMENT_TOKEN_TO_BE_REPLACED

From November 1994 a leaflet from Militant Labour covering some of the issues of the time as well as advertising a number of public meetings.
Many Thanks To The Sender.

END_OF_DOCUMENT_TOKEN_TO_BE_REPLACED 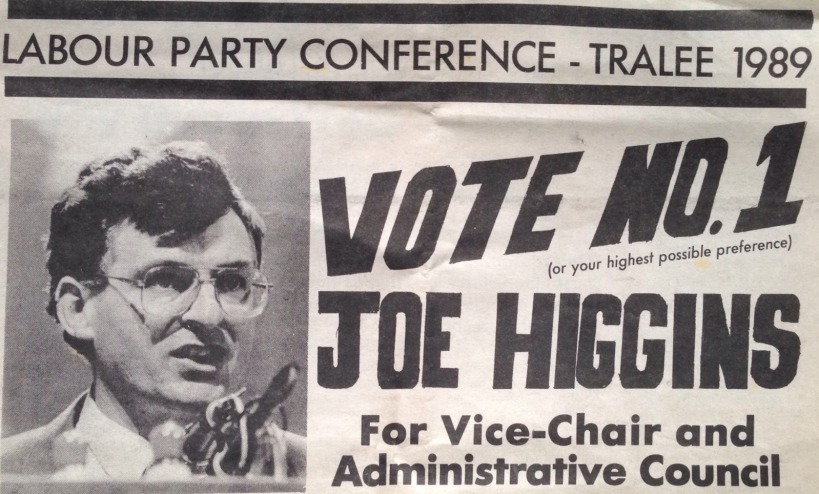 Another series of posters (other bunch here) from Militant, The Socialist Party and Young Socialists that I was sent recently. Most if not all are for Rally’s in Belfast.
Amongst the subjects covered are The Miners Strike, Apartheid , Trotsky and the Poll Tax.
Alas the quality and size are poor but they may well be of interest none the less .

END_OF_DOCUMENT_TOKEN_TO_BE_REPLACED

A series of posters from Militant, The Labour & Trade Union Group and Young Socialists that I was sent recently. Alas the quality and size are poor but they may well be of interest none the less .
(I’ve another bunch to post also)
All are from Northern Ireland with familiar names such as Peter Hadden listed as speakers. 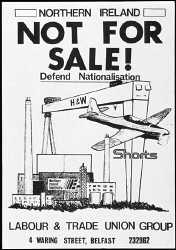 END_OF_DOCUMENT_TOKEN_TO_BE_REPLACED

First off many thanks to the sender.
A clipping from Fortnight Magazine which shows the Late Mick Lally canvassing for Joe Higgins in the 1996 Dublin West by-election. Joe Higgins was running for Militant Labour (which later became the Socialist Party).
The article (which I only have this page of) is about the shockwaves caused by the Vote gained by Higgins in the by-election.
I’ve some Joe Higgins Leaflets from that Campaign posted in the  Militant Labour Category.

Like many my main memories of Mick Lally were from Bracken and Glenroe… and today as I heard reports on the funeral service on the news it also brought memories of Glenroe back.
It was an institution and there were many houses across the land when Sunday at 8.30 everything stopped and families sat down together to watch. In the Granny and Grandads on the regular Sunday visit and later as roles were reversed they with us. People who thought it rude to watch Television when you had guests (or were a guest) made an exception for Glenroe.
In time as people Passed on or Emigrated they were missed at the Sunday night ritual. What would Granny have thought of Miley and Fidelma, we wondered? For it was Miley and the Galway Hurlers that you could never say a bad word about.
Later on in the shows last years, it was us who went up on the Sunday for Dinner and then set off home after Glenroe. One night the Gardai called to the house (a few weeks after a murder in the locality) asking if we could remember seeing a strange car in the area at around eight in the evening on a Sunday.If you have ever been questioned about your whereabouts at a certain time and date you feel foolish not being able to remember.
Eventually I figured that we’d left after Glenroe so we wouldn’t have been in the area at the time.
In the mid 80s I worked as a bus conductor on the 84 route that went to Kilcoole, where some of Glenroe was filmed. On a daily basis we’d carry the day trippers to Kilcoole, out to see if they could get a glimpse of Biddy and Miley.
Ar dheis Dé go raibh d’anam 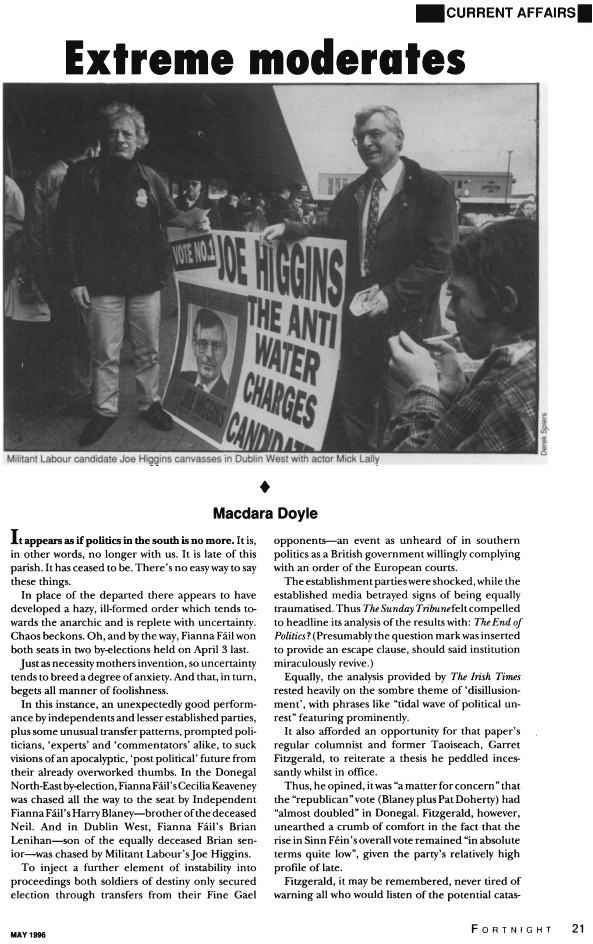 Another Joe Higgins Leaflet from the 1996 Dublin West By-Election. This time Ballyfermot focused. It was the election that put Joe on the map, as he came close to winning the seat won by our current Finance Minister Brian Lenihan.
He asks Voters to vote for him and ‘Other Genuine Left Wing Candidates’ which is fairly uncommon.
We also learn that in 1996 a TD earned £32,000 a year. In 1983 it was £16,400 a year .What is it now? 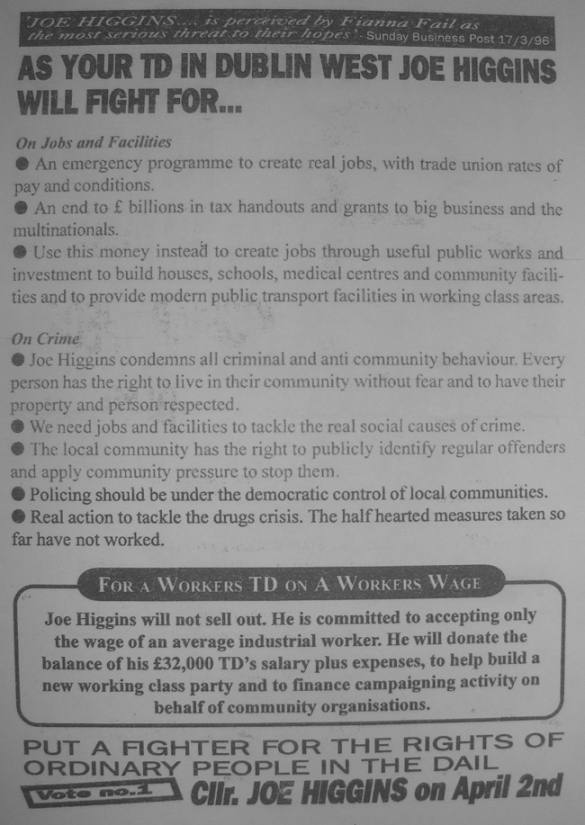 Joe Higgins from the 1996 Dublin West by election, where Brian Lenihan junior won the seat caused by the death of his father Brian Lenihan senior.
Joe was standing for Militant Labour (the forerunner of the Socialist Party) and caused a major shock when he polled just 252 first preferences less than Brian Lenihan.
He was running on an Anti Water Charges platform and must have been very annoyed to find that his Water charges had been paid for him by the council!! 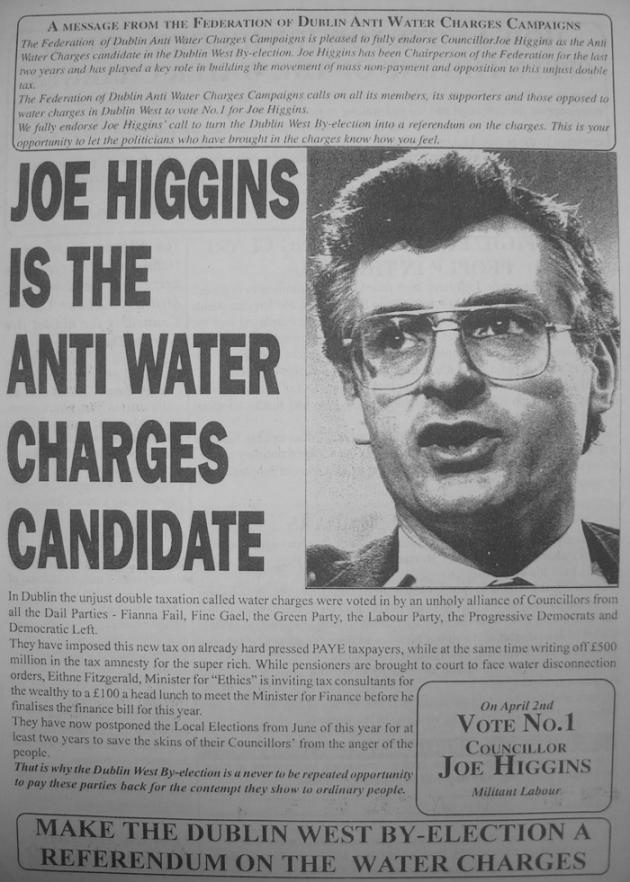