The National Group – "The Others" The Alan Kinsella Podcast

Founded in 1924 , the Party was a split from Cumann na nGaedheal caused by the treatment of Army Officers in the 1924 Army Mutiny. This episode covers the Party as well as the Army Mutiny. The Group were also known as The National League and National Party

A look at the 1997 Westminster Election Campaign of former Northern Ireland International Derek Dougan as well as a bit on his football career, time at the PFA and so on.

From the 1997 Westminster Elections a flyer from Ulster Unionist MP Ken Maginnis running in Fermanagh South Tyrone. Maginnis was re elected.
Many thanks to the sender.

END_OF_DOCUMENT_TOKEN_TO_BE_REPLACED

From 1997. The Democratic Lefts Eamon Gilmore sends out a detailed leaflet about the 1997 Budget.
It’s interesting to look the tax allowances, tax rates, mortgage interest relief of the time. Also covered are the PRSI/Levies , various Social Welfare rates, Education and Health schemes.

END_OF_DOCUMENT_TOKEN_TO_BE_REPLACED

Growing up it was common to see ‘Free Nicky Kelly’ graffiti around the place. In 1978  Kelly, a then IRSP member was wrongly convicted along with Osgur Breatnach and Brian McNally of The 1976 Sallins Train Robbery. After a campaign for his release, he was release on “humanitarian grounds’ in 1984 and was pardoned in 1992.
Here having been elected to Arklow UDC in 1994 (topping the poll), Kelly stood in the 1995 Wicklow by-election. These leaflets are from the 1997 General Election, where he polled almost 5000 votes but failed to get in.

END_OF_DOCUMENT_TOKEN_TO_BE_REPLACED

The then Taoiseach, Bertie Aherns, brother Noel Ahern from the 1997 General Election where he topped the polled getting over 1.5 quotas. 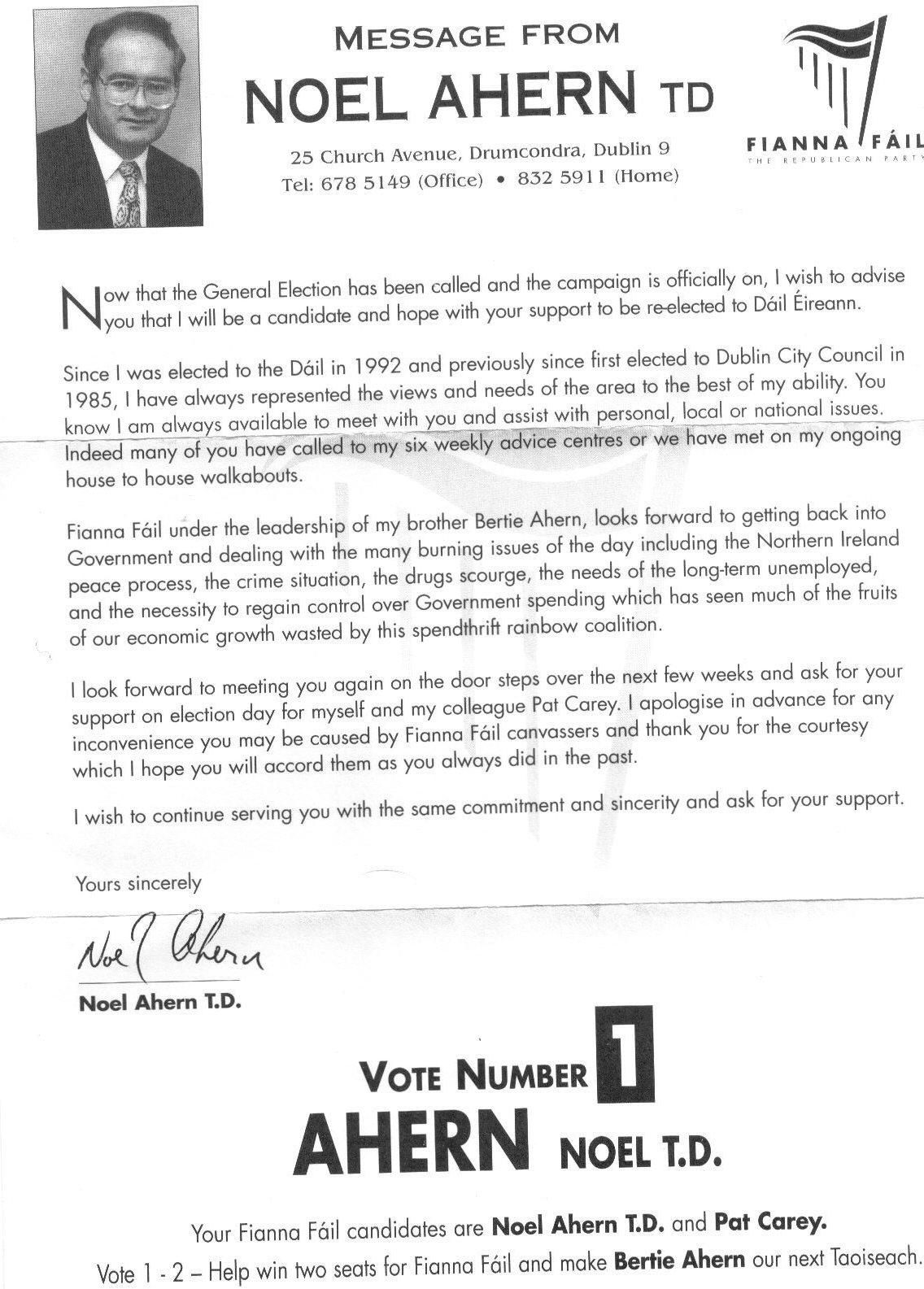 Sean Misteil – Labour Councillor in Blackrock ( who had been co opted to replace Niamh Breathnach) urges voters to Vote for Adi Roche for President. Increasing his own profile in the process. He lost his seat in 1999.

A Leaflet for President Mary McAleese from the 1997 Presidential Election. The Slogan and theme of the campaign being ‘Building Bridges’.
Interesting to note that she was a joint Fianna Fail /Progressive Democrat candidate.