From the 1977 General Election a leaflet from Sean Walsh of Sinn Fein The Workers Party running in Carlow Kilkenny. He polled 1666 votes and missed out on a seat.

END_OF_DOCUMENT_TOKEN_TO_BE_REPLACED

A Leaflet from Sean Walsh an Independent candidate running in Comeragh for a seat on Waterford County Council. He is endorsed by Waterford Independent TD John Halligan. I’m told he is the same Sean Walsh who was a Workers Party Councillor in Kilkenny for many years.

The Campaign Facebook Page
Many thanks to the sender. 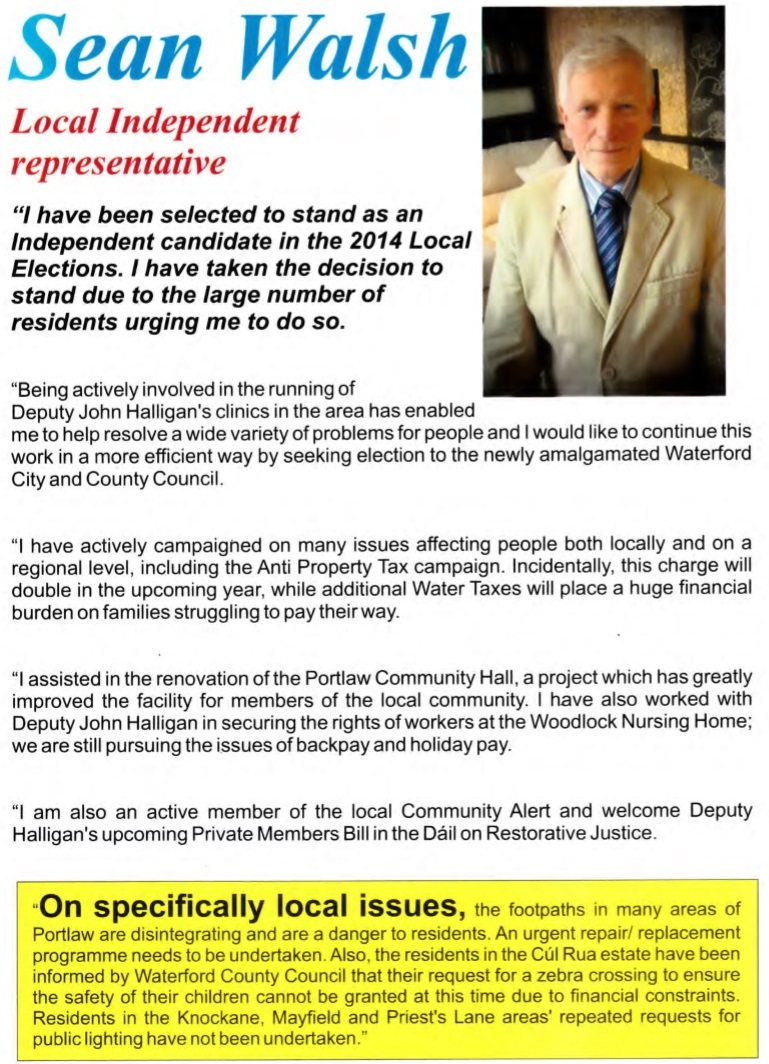 END_OF_DOCUMENT_TOKEN_TO_BE_REPLACED

From the 1979 European Elections,”The Workers Voice in Europe” from Sinn Fein The Workers Party. There is a message of how the current representatives only had farmers interests at heart rather than workers interests. The party’s candidates Tony Coffey, Seamus Rodgers, Donnchadha Mac Raghnaill, Sean Walsh, Tomas MacGiolla and Mick Dunphy are listed at the bottom.

From the 1985 Local Elections , Workers Party candidate Sean Walsh who was running in the Piltown LEA. Walsh was elected on the first count with 1,145 votes. He first won a seat in the 1974 Local elections and was returned again in the 1979 Local Elections. He stood in a number of General Elections as well as the 1979 European Elections.
The closure of Clover Meats which was based in Ferrybank and closed in 1984 is a big issue for Walsh. Was something amiss with the closure?

The 1987 General Election- Dublin South West.  This is the Leaflet of  Chris Flood and the late Sean Walsh.
Colm McGrath, recently charged with corruption is pictured as one of the Support Team on the back of the leaflet.
(Tony Fox leaflet : http://wp.me/pDoVn-31b and Don Lydon leaflet http://wp.me/pDoVn-FX)

Sean Walsh  ‘who has a long record of dedicated public service” and “is totally committed to the needs of his constituency through his council involvement, his Dail experience  and his local knowledge” came to the attention of the Planning Tribunals.    ….. “his council involvement ……. and his local knowledge” served him well in certain quarters. The Park opposite ‘The Square’ is named after him.

Chris Flood who had his name mentioned in the Tribunals also, “worked unstintingly in the interests of residents…..” etc etc

One or two of the “Support Team” pictured, of John Hannon, Jim Barry, Padraig Lynch, Colm McGrath, Seamus McGowan and Sean Ardagh, have also got a mention at the Tribunals.