From the 1985 Local Elections a personal letter from Liam Kavanagh Minister for the Environment to the Voters of Bray. December 21, 2010

From the 1985 Local Elections a personal letter from Liam Kavanagh Minister for the Environment to the Voters of Bray.
In it he mentions money being provided for amongst other projects the Bray/Shankill By-Pass. Reading it reminded me of those horrendous tailbacks at Shankill and Little Bray.
For the Council the Labour candidates were John Byrne, Barbara Hyland (who later stood as an Independent) and Nancy Mahony running for Wicklow County Council and Paddy Mooney and Siobhan Turner joining them on the ticket for the elections to Bray UDC.
Many thanks to the Sender. 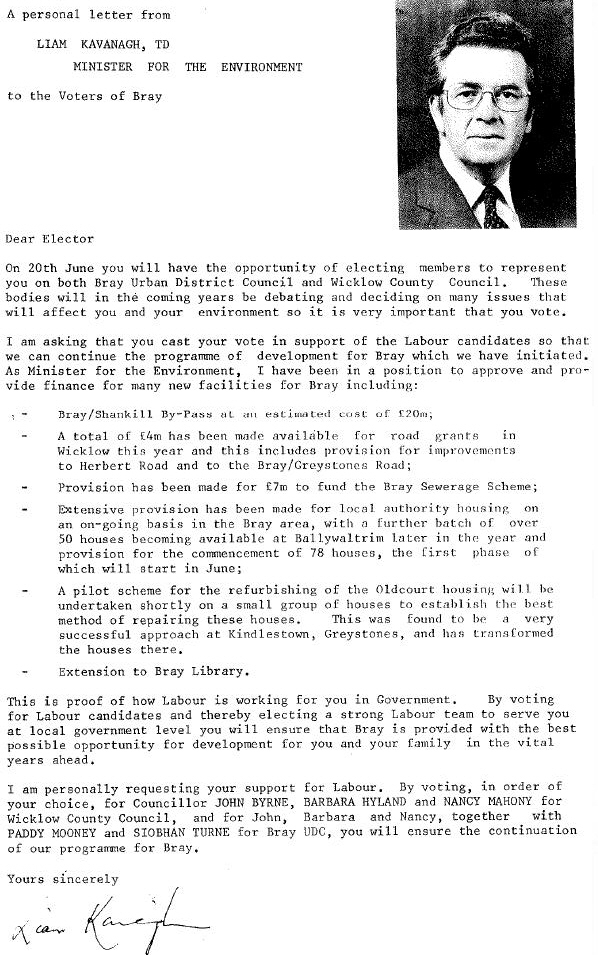 First off many thanks to the sender.
A 1981 fundraising letter from Paddy Kavanagh (with post compliments of Liam Kavanagh) to Labour Party Wicklow members promoting “A Sweepstakes on the Aintree Grand National” . 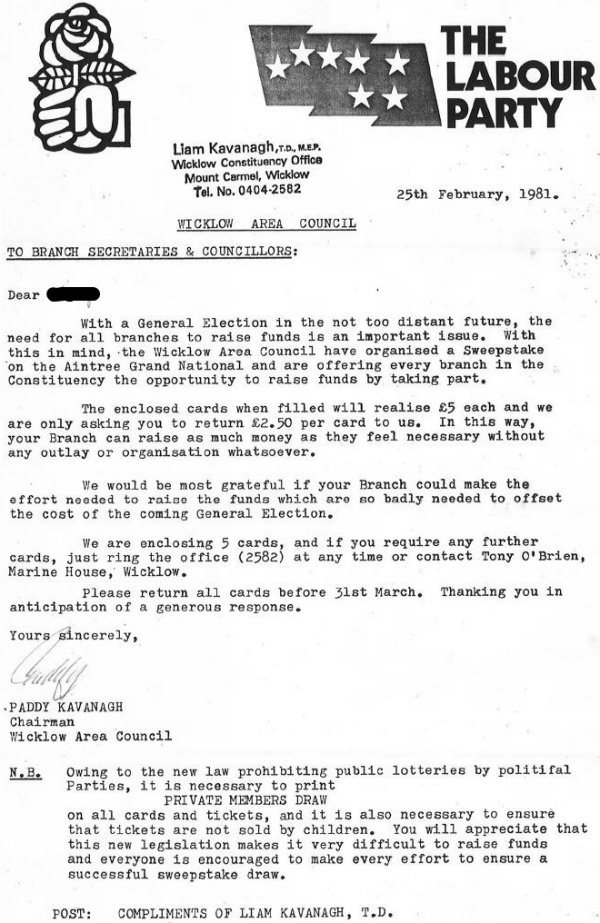 From 1979- Labour Party ‘Victory Dinner’ in honour of Liam Kavanagh Menu with Toasts and Autographs August 22, 2010

First off man thanks to the sender. A Charming item.
From 1979 a Menu for the Labour Party Victory dinner held in honour of the election of Wicklow TD Liam Kavanagh to the European Parliament.
Amongst the menu are some delights such as Grapefruit Marachino and Brussels Sprouts Chateau (presumably in honour of the new Job in Brussels).
There is also a list of Toasts, proposed by various luminaries such as Michael O’Leary, Brendan Halligan and Justin Keating.
On the back of the Menu there was a page for autographs.
This one has Brendan Halligans, Liam Kavanaghs and another which is difficult to identify.

END_OF_DOCUMENT_TOKEN_TO_BE_REPLACED

From the 1985 Greystones TC election. I’m not sure who of the three, Mallie Jacobsen, Shay Monaghan and Joe Sweeney were elected.
It’s unusual to see ‘….we understand that the Commissions powers are very limited…..’, where often in Town Council elections you see candidates promising to change a lot of things that would be outside the Town Councils remit.