From the 1983 Westminster Election in North Antrim a Sorry I Missed you style card from Ian Paisley.

From the 1973 Assembly Election Campaign “Save Northern Ireland From A United Ireland” a message from Ian Paisley urging voters to vote for The Ulster Democratic Unionist Party in association with a group called the Loyalist Coalition. It also asks for contributions to the Party. 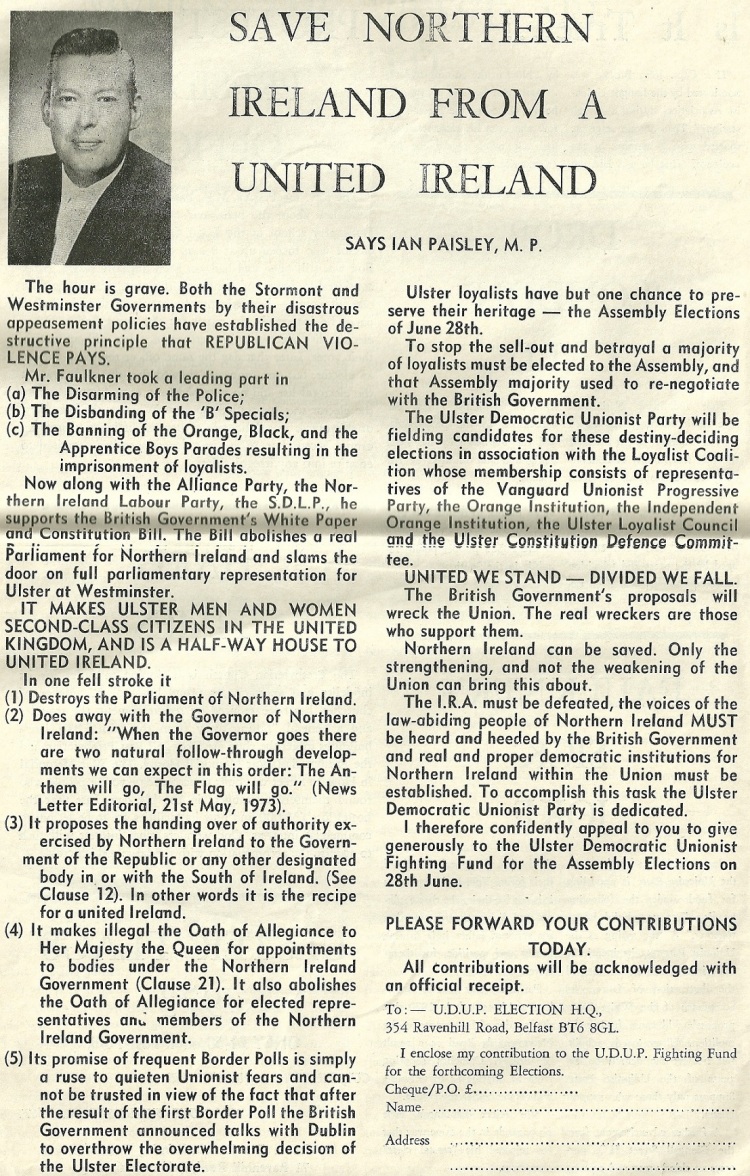 From the 2017 Assembly Elections a leaflet from George Robinson, Adrian McQuillan and Maurice Bradley who are running for The DUP in East Derry (East Londonderry)
Many thanks to the sender. 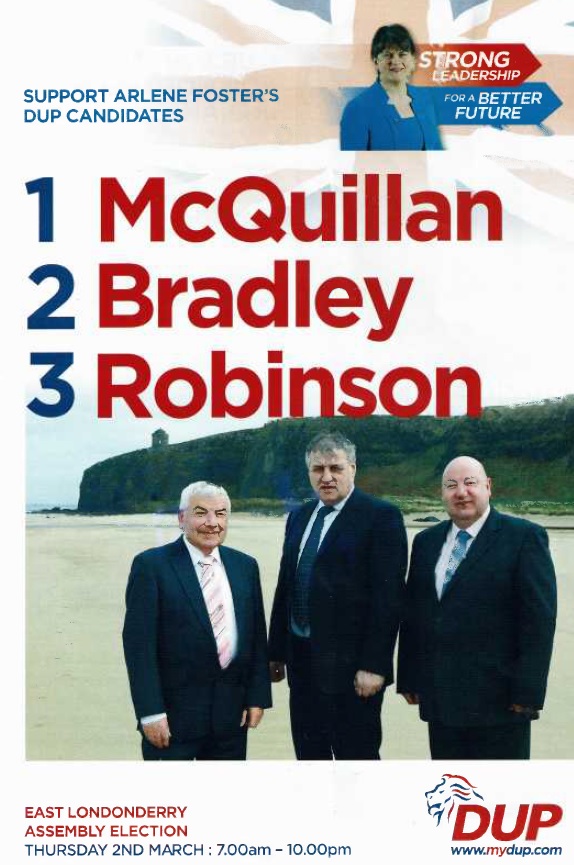 END_OF_DOCUMENT_TOKEN_TO_BE_REPLACED

From the 1986 North Antrim By-Election a leaflet from Ian Paisley of the DUP. Paisley won 97.4% of the vote!

It was one of the fifteen 1986 Northern Ireland by-elections held on 23 January 1986, to fill vacancies in the Parliament of the United Kingdom caused by the resignation in December 1985 of all sitting Unionist Members of Parliament (MPs). The MPs, from the Ulster Unionist Party, Democratic Unionist Party and Ulster Popular Unionist Party, did this to highlight their opposition to the Anglo-Irish Agreement. Each of their parties agreed not to contest seats previously held by the others, and each outgoing MP stood for re-election.

END_OF_DOCUMENT_TOKEN_TO_BE_REPLACED

From the 2013 Mid Ulster By-Election a leaflet from Independent and ‘The Agreed Unionist Candidate’ Nigel Lutton.
Theres a profile of the candidate, Peter Robinson and Mike Nesbitt extolling the virtues of the candidate as well as some policies.

END_OF_DOCUMENT_TOKEN_TO_BE_REPLACED

The 1987 Election Special of “The Protestant Blu Print” edited by Ian Paisley. Its from around the time of the Anglo Irish Agreement and decries the forces of Dublin and London.

END_OF_DOCUMENT_TOKEN_TO_BE_REPLACED

“Save Ulster with the Ulster Democratic Unionist Association” Leaflet ..from the early 80s? November 30, 2011

Got this recently , a leaflet from the ‘Ulster Democratic Unionist Association Co. Londonderry’, outlining their aims and objectives. I think its from the early 80s but can’t be sure. I can’t find anything online about them. I presume that they were linked to the Democratic Unionist Party.
If anyone has any details of the group I’d love to know.