A Leaflet from Justin Barrett who is running for The National Party in the Dublin Bay South Bye-Election.

END_OF_DOCUMENT_TOKEN_TO_BE_REPLACED

From 1946 a 36 page booklet “Partition -A Positive Policy” produced by Ailtirí na hAiséirghe outlining in deatil the party’s plan to end partition.

A leaflet as bearla agus as gaelige from The National Party outlining the party’s nine main principles.
Many thanks to the sender

END_OF_DOCUMENT_TOKEN_TO_BE_REPLACED

“The Blueshirt” the paper of the National Guard , also known as the Blueshirts from August 19th , 1933. Has details of the groups activity, the rules of the group and so on. A really interesting piece of Irish History. (apologies that it’s not in pdf but the paper was too big for my scanner, so had to scan by half pages and then reunite the pages) 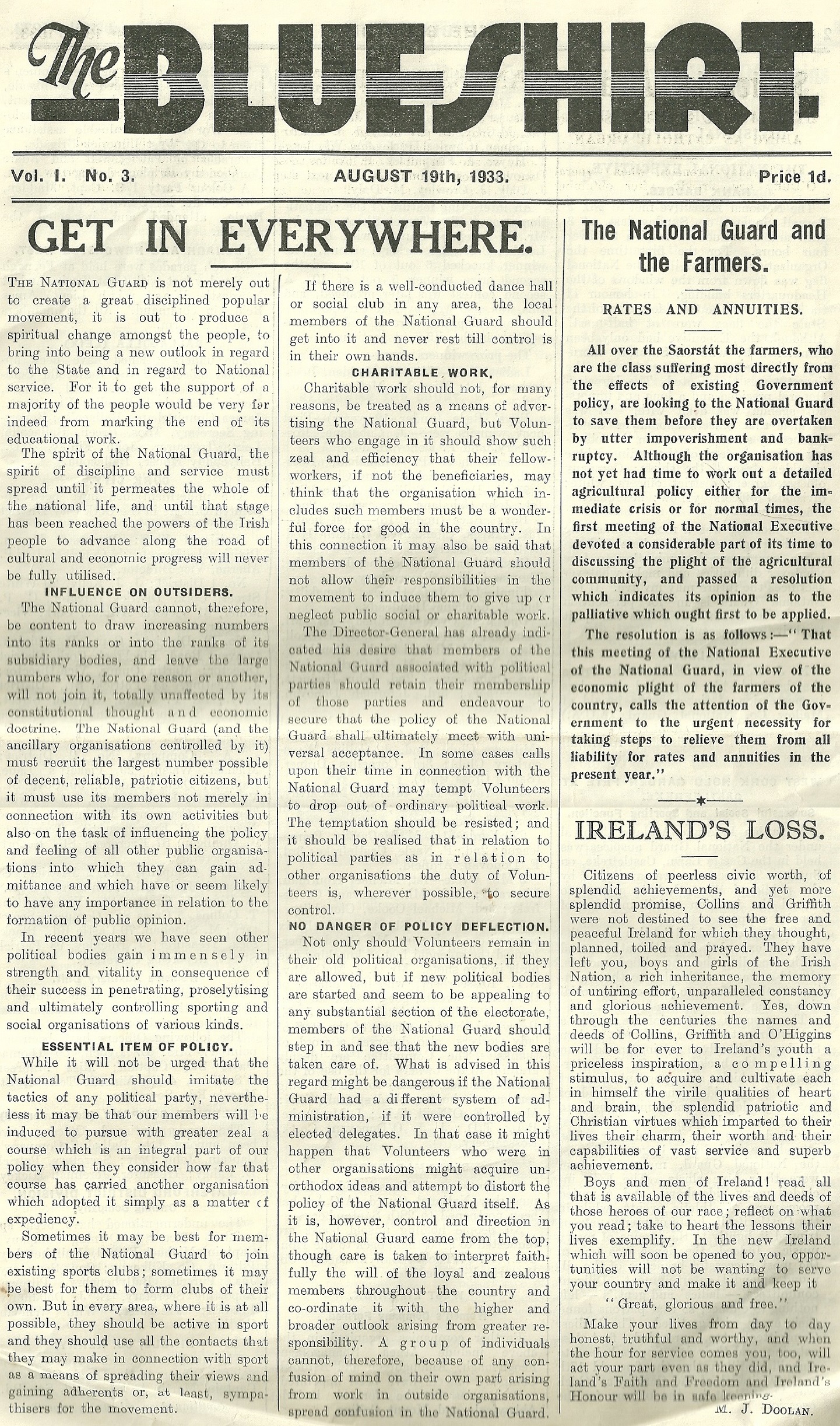 END_OF_DOCUMENT_TOKEN_TO_BE_REPLACED

National Action were a Fascist style party that fielded one candidate, Séamus Murphy in the 1954 General Election in Dublin North East where he polled 1430 votes.It’s a sizeable booklet so it’s in pdf
Many thanks to the sender 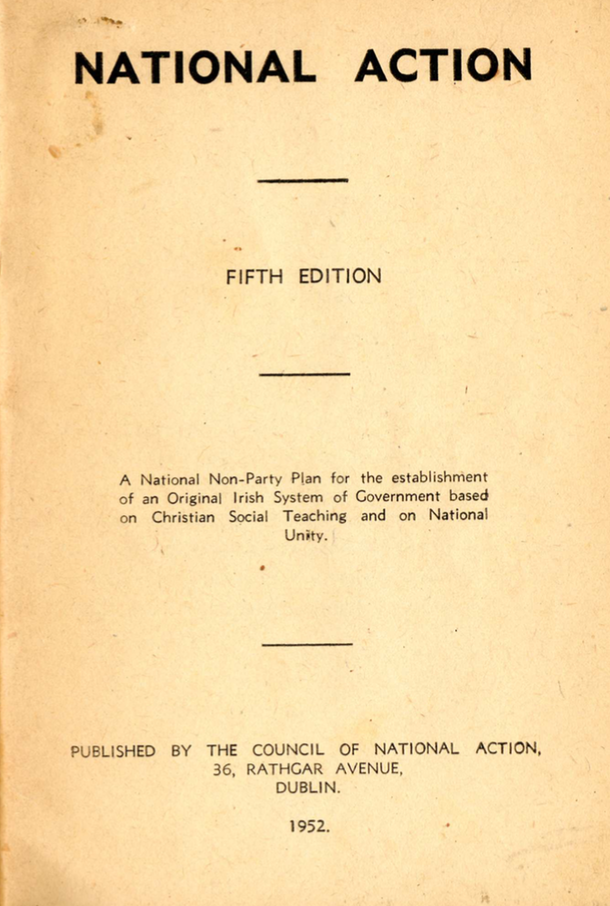 From the 1943 General Election a leaflet from Ailtirí na hAiséirghe candidate Eoin O’ Coiglig (Owen Quigley) running in Louth. A former Labour Party councillor he joined Ailtirí na hAiséirghe after their foundation, he polled 585 votes.
He was reelected to Drogheda Corporation and Louth County Council in 1945. Pictured in the leaflet is Gearóid Ó Cuinneagáin, The Ceannaire (leader) of the party.
Many thanks to the sender. 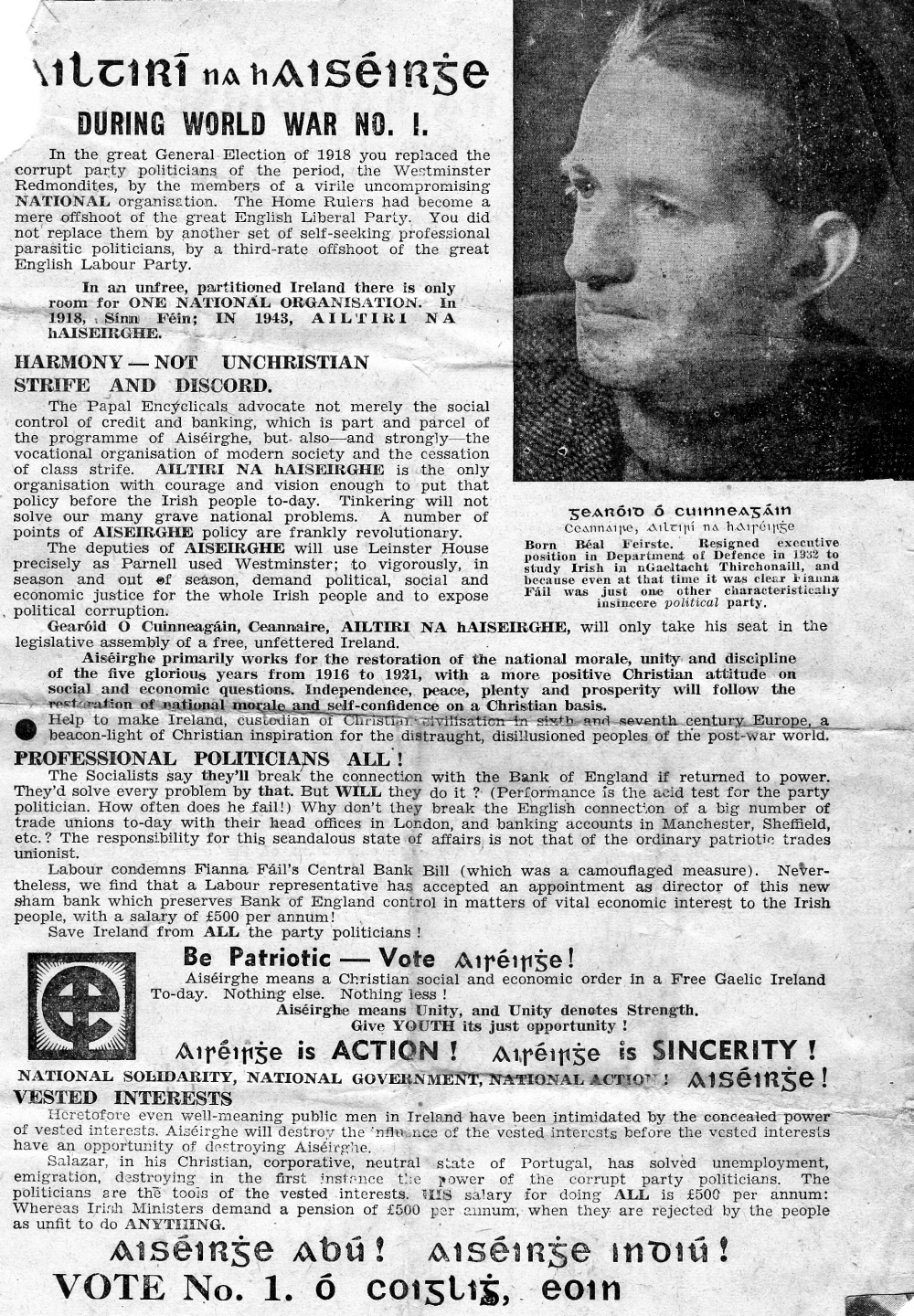 Something of historical interest from the mid 1940s, The Ailtirí na hAiséirghe Plan to end Partition. The six headings to the plan were ‘Propaganda’ ,’ Passive Resistance’, ‘Physical Force’, ‘Prayer’ , ‘Representatives’ and ‘ Provincial Coucil’.

Ailtirí na hAiséirghe were a relatively popular Christian Nationalist stroke Fascist Party that started in Ireland in the 1940s. There is an excellent book “Architects of The Resurrection” about them with a decent post about it here

In 1945 the party contested the Local Elections winning 9 seats on various Local Authorities. I’ll edit this post in due course with details of those elected , votes etc where possible.

In the 1948 General Election it stood just one candidate.
William Hargadon in Sligo-Leitrim who polled 323 votes.

END_OF_DOCUMENT_TOKEN_TO_BE_REPLACED

Leaflet from The Democratic Right Movement ..”The punt restored as our Nations currency” ,”deportation of ALL failed asylum seekers” June 7, 2011

Amongst other things they also want “the deportation of ALL failed asylum seekers” and “An end to non-European immigration”.
One of those involved is Michael Quinn who stood in Dun Laoghaire in 1992 (Leaflets here)

END_OF_DOCUMENT_TOKEN_TO_BE_REPLACED

February 2007 Edition of the Immigration Control Platforms Newsletter- “..% of foreign residents shall not exceed 10% of the population.” October 21, 2010

From February 2007 an Edition of the Immigration Control Platforms Newsletter.
There is a report of the groups AGM where amongst the items adopted were.

That a referendum be held to amend the constitution as follows:
“The government shall ensure through legislation, policies and planning that
the percentage of foreign residents shall not exceed 10% of the population”
[i.e. the current percentage as shown by the Census of 2006]; this amendment to
allow for recognition of EU Treaty agreements.

Thanks to the sender. 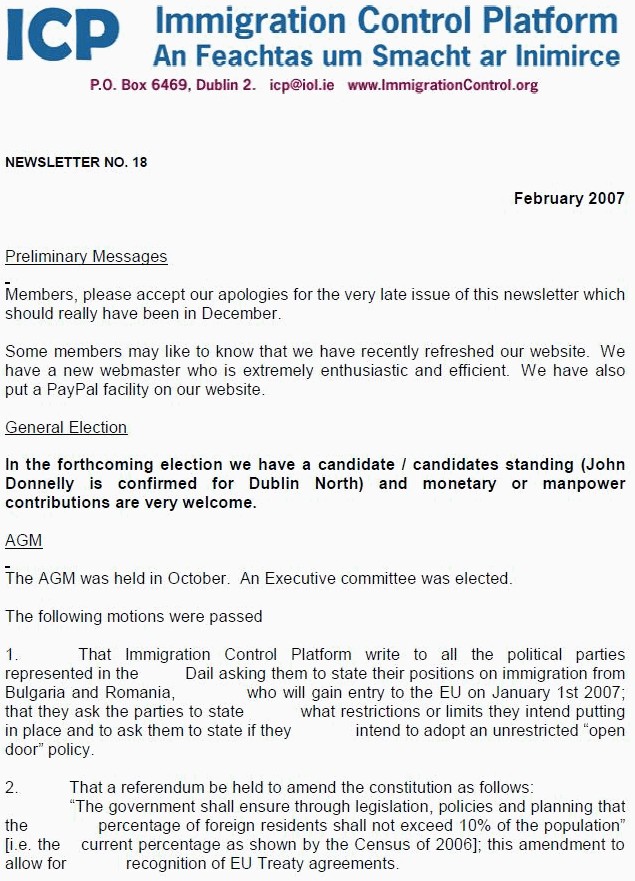