END_OF_DOCUMENT_TOKEN_TO_BE_REPLACED

As close as I’m ever going to get to being a fashion blogger! … Found recently in an attic a “Vote Fianna Fail ” T-Shirt with “Bring Back Jack” on the back. I presume its from the 1977 General Election campaign.
Many Thanks to the sender. 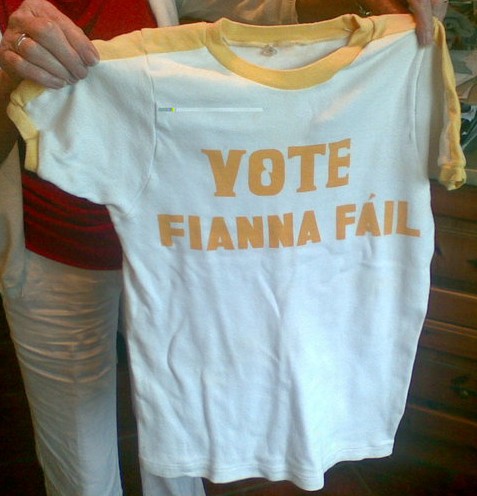 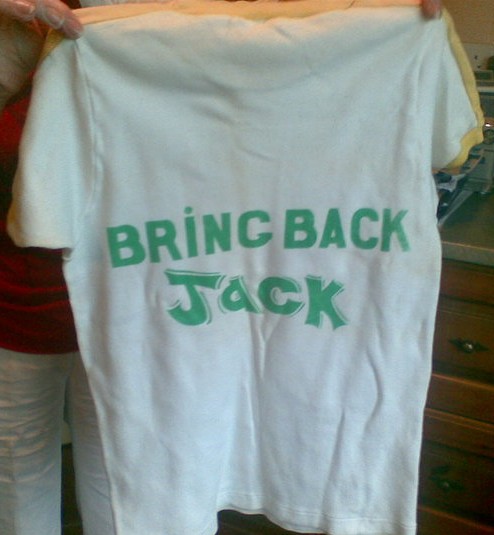 From the 1977 General Election a leaflet for Denis Foley, Kit Ahern and Tom McEllistrim running for Fianna Fail in Kerry North. McEllistrim and Ahern were both elected.
The leaflet also gives some details of that famous 1977 Fianna Fail manifesto such as the “Abolition of Rates..” and unusually “For housewives -weekly information on prices on Radio, Television and newspapers”
Kita Ahern despite her long political career only had the one term in the Dail , she was the Aunt of Eoin’Bomber’ Liston and later joined the Progressive Democrats.
Tom McEllistrim succeeded his father (who had held a Dail seat in Kerry since 1923) in 1969 and held the ‘family’ seat until 1987. He regained it in 1989 before losing it again in 1992. His son also Tom McEllistrim served as a TD for Kerry North from 2002 to 2011.
Denis Foley was elected to teh Dail in 1981 and held the seat until 1989 but regained it in 1992 before retiring in 2002.

END_OF_DOCUMENT_TOKEN_TO_BE_REPLACED

From the 1979 European Elections a leaflet from Fianna Fail candidates for Dublin Ruairi Brugha, Sile De Valera, Joe Fox and Michael Yeats. Of the four candidates just Sile De Valera was elected. Result here
The leaflet also contains a message from then Taoiseach Jack Lynch.
Its an interesting line up in that Ruairi Brugha was the son of Cathal Brugha, Sile DeValera the Granddaughter of Eamon DeValera and Michael Yeats son of the Poet WB Yeats.

END_OF_DOCUMENT_TOKEN_TO_BE_REPLACED

“Remember When There Was No Housing Problem?” -Fianna Fail 1969 General Election February 13, 2012

“Remember When There Was No Housing Problem?” ask Fianna Fail from the 1969 General Election. The amount of houses built, the speed of house building and other feats that were the hallmark of our recent construction boom are all mentioned.
We also have the slogan “Let’s Back Jack”.

From the 1979 Local and European Elections a letter to voters from Fianna Fail Taoiseach Jack Lynch.
Fianna Fail and Irelands record in Europe since joining is praised and there are some details of the Fianna Fail Local Elections manifesto.

From the 1973 General Election -“What will this Election decide?” Vote Fianna Fail- For Progress with Stability December 28, 2010

From the 1973 General Election campaign an ad for Fianna Fail asking “What will this Election decide?” and urging voters to ‘Vote Fianna Fail- For Progress with Stability’.
The Ad begins with the words..

This is one of the most important elections in the history of the State. It comes when the future of the North is in the balance,when crucial decisions are being taken in the EEC and when the institutions of the State are being attacked by the forces of subversion and Anarchy….

Beside a picture of Jack Lynch, six issues are listed which Fianna Fail ask if a coalition government would be better?
From the Galway advertiser site.

From 1973 a “Welcome To Fianna Fail Country” Poster and Jack Lynch Poster December 9, 2010

Two Fianna Fail posters from the 1973 General Election. One with the message “Welcome To Fianna Fail Country” (Later copied by Tom Parlon and I’m sure others too) and a Jack Lynch poster also. 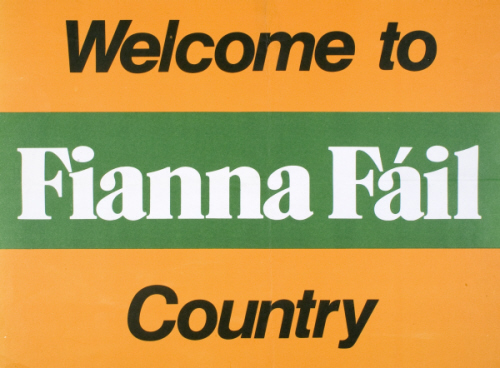 END_OF_DOCUMENT_TOKEN_TO_BE_REPLACED

“What do they expect you to believe?” -Fianna Fail anti Labour and Fine Gael ad from the 1973 General Election December 5, 2010

From the 1973 General Election campaign a Newspaper Ad for Fianna Fail attacking Labour and Fine Gael.
Amongst the reasons….
-that either party, without experience in government for 16 years, can guide the country in these difficult and dangerous times?
taken from the Galway Advertiser Site

Erskine Childers -“A President for all the nation” -1973 Presidential Election October 29, 2010

An Ad for the late Erskine Childers running in the 1973 Presidential Election. It was interesting that there was no message from Childers himself just one from Lynch.
Also included is a newspaper clipping advertising Fianna Fails Galway Election HQ and a Rally in Eyre Square.
Childers, a TD from 1938 until 1973, had spells as Tánaiste , Minister for Posts and Telegraphs, Minister for Transport and Power, Minister for Lands and Minister for Health.
He was elected to the Presidency in 1973, He passed away on the 17th of November 1974 and was succeeded by Cearbhall Ó Dálaigh.
Taken from the wonderful Galway Advertiser site. 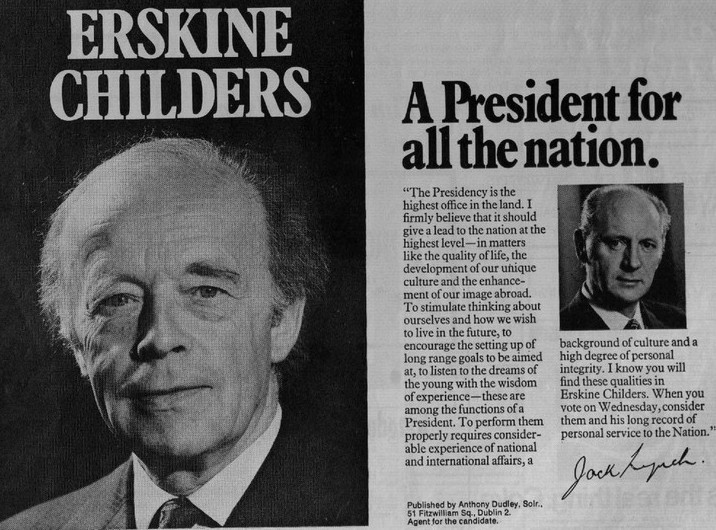 END_OF_DOCUMENT_TOKEN_TO_BE_REPLACED

From 1977 an abridged version of the Fianna Fail Election Manifesto. The 1977 Fianna Fail Manifesto has gone down as one which in part led to Irelands fiscal crisis in the 80s. In the main the Manifesto was reportedly crafted by Martin O’Donoghue.
It proved popular with the voters as Fianna Fail were returned with an unprecedented 20 seat majority.
Amongst the below are Tax cuts, abolition of Rates, first time buyer grants of £1000 and other giveaways.
Amongst the first time TDs elected were Bertie Ahern, Pádraig Flynn, Liam Lawlor, Charlie McCreevy, Martin O’Donoghue and Albert Reynolds.

The vision of this manifesto is an Ireland in which a successful strategy for national reconstruction offers real security for all. It has been carefully put together and costed for implementation in government by a team under Jack Lynch as Taoiseach. It is a blueprint for leadership which,by firm and just administration of law,esteem and enterprise,and concern for the individual,will bring back that sense of confidence and interdependence which is essential to the growth of peace and social progress,and of our cultural heritage and place among the nations of the world.

Apologies for the size of the text.
Taken from the wonderful Galway Advertiser Site.

END_OF_DOCUMENT_TOKEN_TO_BE_REPLACED

Was sent these , many thanks to the donor.A Jack Lynch poster from 1973 and a Brendan Corish one also from the 1973 General Election.
The Wexford based, Brendan Corish, was first elected in 1945 in a by-election caused by the death of his father Richard Corish.He was re elected to the Dail on each occasion before retiring in 1982. He served as Labour Leader for 17 years.
He served as Minister for Social Welfare from 1954 until 1957 and was Tánaiste and Minister for Health and Social Welfare from 1973 to 1977. He passed away in 1990.
The late Jack Lynch first forays into the public world were as a player for both the Cork football and Cork Hurling teams.
In his time he won five Hurling All Ireland medals and one Football All Ireland.
He was first elected to the Dail in 1948 and retired in 1981. He succeeded Sean Lemass as Leader of Fianna Fail and as Taoiseach. In his time he served three terms as Taoiseach and was at the helm in the turbulent days of the Arms Crisis and Bloody Sunday. He passed away in 1999.