The Democratic Left were opposed to Water charges, Water Tax or Water Rates. They wanted to put pressure on other councillors to oppose them too.
Looking at the previous years vote thats shown, some Fine Gael and Fianna Fail voted against the charges.
The Government were seen to be bringing in these extra taxes whilst at the same time having the Tax Amnesty.
“In 1985 the Councils in Dublin, following the election of councillors such as The Democratic Lefts Eamon Gilmore…….” took a bit of phrasing considering Gilmore was elected for The Workers Party. 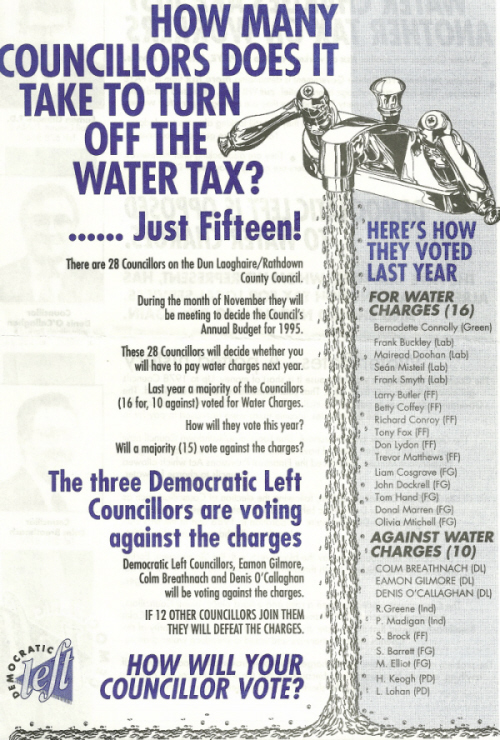 END_OF_DOCUMENT_TOKEN_TO_BE_REPLACED

Two leaflets, the first coming after the election.
On the front Marian White thanks voters, she came within 28 votes of winning a seat in Blackrock (First Count Details Here). It illustrates the inroads made by the Workers Party at the time and the future potential.
On the reverse we have Eamon Gilmore proclaiming ‘In Dun Laoghaire The Workers Party are Winning’ detailing the vote increase and election of himself, Denis O’Callaghan, Colm Breathnach and how close Marian White came to being elected.
The Second leaflet was ‘and the last shall be first’…..

END_OF_DOCUMENT_TOKEN_TO_BE_REPLACED

This is the first four pages of the Newsletter ‘Resistance’ November/December 2007 issueproduced by the Irish Socialist Network. (I’ll put the inner fold up at a later date)

The ‘What we Stand For’ section explains the groups policys. To date John O’Neill has (to my knowledge) been their only candidate, running in the last two local elections and also in the last General Election.

END_OF_DOCUMENT_TOKEN_TO_BE_REPLACED

Its from the back of a Marian White Leaflet (the lady on the left of the picture). Its eyecatching to say the least.
Colm Breathnach, Denis O’Callaghan and Eamon Gilmore were elected.

This is a letter Sent by Eamon Gilmore, Colm Breathnach and Denis O’Callaghan post 1992 Workers Party Split. It outlines the policies  and aims of the group. Polices look like those of The Workers Party but without the Democratic Centralism.

The breakway group  were initailly called ‘New Agenda’ and contested the 1992 Westminister Elections under that name. However the name didn’t last long and the party called then itself  ‘The Democratic Left’, which itself joined the Labour Party in 1998. 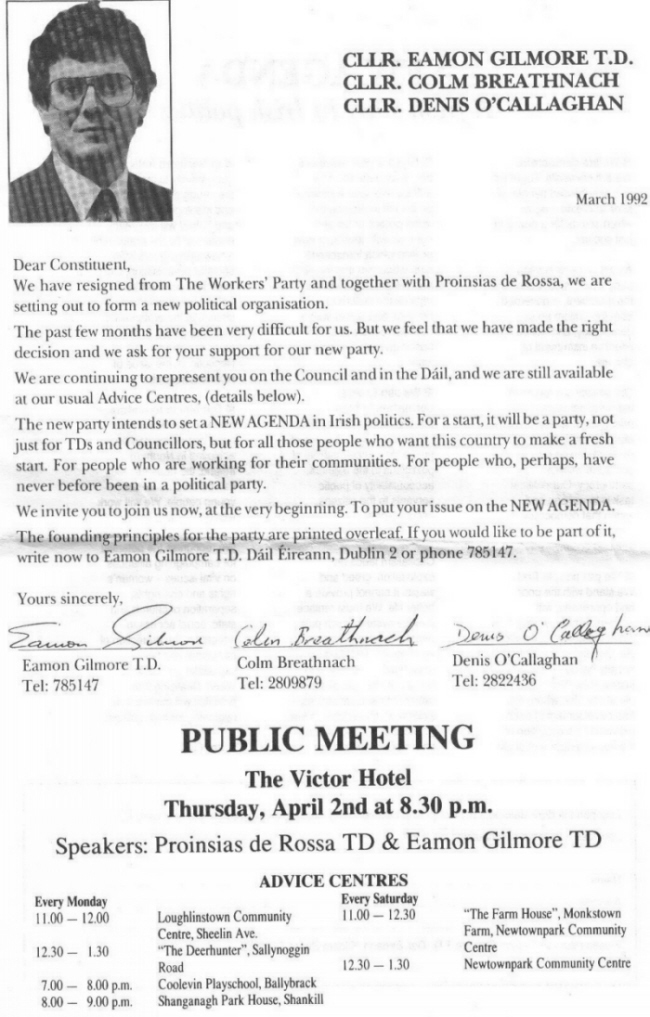