A leaflet from Cork Socialist Party Councillor Mick Barry advertising the Socialist Party ‘National Collection 2010’. It also mentions that he will be a candidate in the 2011 General Election and that Anglo should be shutdown and the bondholders burned.

END_OF_DOCUMENT_TOKEN_TO_BE_REPLACED

A video (he has quite a few posted on Youtube) from Socialist Party / United Left Alliance candidate in Cork North Central Councillor Mick Barryon Why Everybody Should Vote. Barry is seen as having an outside chance of winning a seat.

From the 2011 General Election Campaign an Ad for Mick Barry of the Socialist Party (United Left Alliance) running in Cork North Central on the side of a bus.
Many thanks to the sender who notes that its the “First time we’ve had posters on the sides of buses.”

END_OF_DOCUMENT_TOKEN_TO_BE_REPLACED 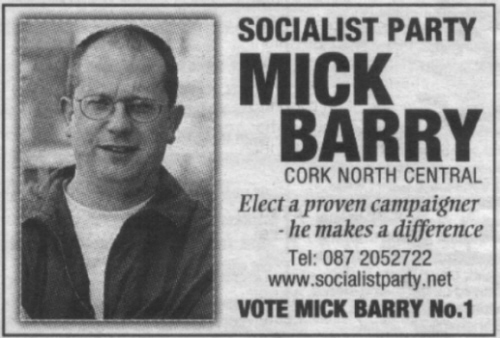