From the 2010 Westminister Election, a leaflet from Conservative and Unionist candidate David Harding running in Foyle. David Harding polled
1,221 votes (3.22%) and lost his deposit.
In the leaflet a lot of emphasis is put on the partnership between the UUP and the Ulster Unionist Party and how ‘for the first time in a generation, people in Northern Ireland can have a decisive say in who forms the next UK government.’
Problem of course being that it may now be the DUP who have that say.
Harding is pictured all over Derry with a grey haired lady, anyone know who she is? 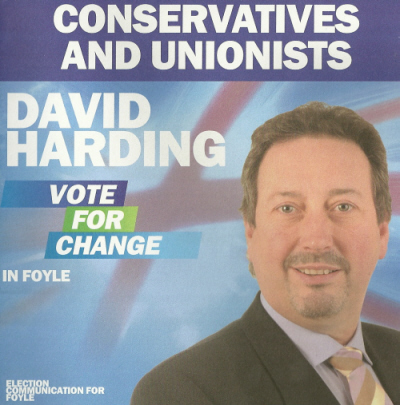