From the June 1984 edition of Young Fine Gael magazine ‘Futureline’ an interview with then Fine Gael TD for Dublin Central Alice Glenn. Among the topics covered are Divorce, Contraception and Children “Born Out of Wedlock”. A fascinating insight to the views of the time.

From the November 1982 General Election a leaflet from Fine Gael candidates Alice Glenn, John Colgan and Michael Keating who were running in Dublin Central.
Glenn and Keating were elected. All three candidates ended up running as Independents or in Keatings case The Progressive Democrats. Colgan ran as an Independent in the 1991 local Elections whilst Alice Glenn ran as an Independent in the 1997 General Election.
Glenn was probably most famous for her ‘A Woman Voting for Divorce is like a Turkey voting for Christmas‘ leaflet. I also have her reasons for ‘leaving’ Fine Gael “Why Fine Gael divorced Alice Glenn” 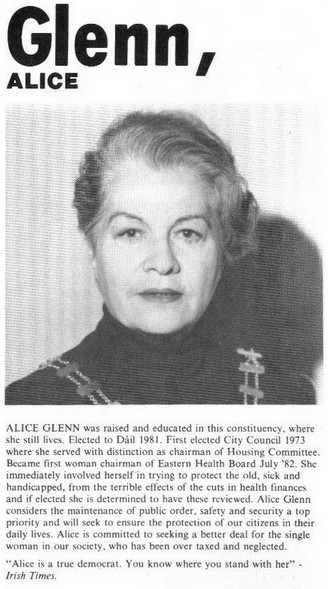 END_OF_DOCUMENT_TOKEN_TO_BE_REPLACED

The now Independent TD, Alice Glenn explains why she left Fine Gael or how Fine Gael left her. Today Alices views look a bit extreme , however in 1987  Alices views were mainstream enough. The Other Alice Glenn report I have from around the 1986 Divorce Referendum was published by a group called ‘Family Forum’, although not mentioned here the PO box address is the same as Alices here.

Alice Glenn was first elected to the Dail in 1981 before losing her seat in the Feb 82 election. She regained her seat in the November 1982 election and served until 1987 where running as an independent she lost her seat.

END_OF_DOCUMENT_TOKEN_TO_BE_REPLACED

You got your picture taken once with Esther Rantzen ….so have it as the centrepiece of your campaign for the 1991 Local elections…..

Wonder did the electors know you had your picture taken with Alice Glenn and Michael Keating 10 years earlier though?

The Alice Glenn Report May 1986- ‘A Woman voting for Divorce is like a Turkey voting for Christmas’ September 10, 2009

‘A Woman voting for Divorce is like a Turkey voting for Christmas’ says Alice
We’ve moved on a bit since Alice, but this gives an idea of attitudes in the mid 80’s. Alice wasn’t a crackpot either as these views were fairly mainstream. She was a Fine Gael TD for Dublin Central at the time.
Well worth a read.