A “Free All Irish Political Prisoners” Poster with Karl Marx and (I presume) James Connolly. It was hiding in a friends uncles garage in Germany until recently.
A comment below gives a little history to the poster.
The poster was produced by the Prisoners Aid Committee in the early 70′s. The PAC was based in London and was originally set up in 1972 by Official Sinn Fein to campaign for IRA prisoners. The poster is a reminder that Karl Marx and Friedrich Engels had campaigned for Republican prisoners. The PAC designed and paid for the posters which were widely distibuted. By the end of 1974 all members of the PAC had been expelled from the British branch of the stickies, Clann na h’Eireann but the PAC continued to campaign for all Republican prisoners in English jails until the end of the 80′s. 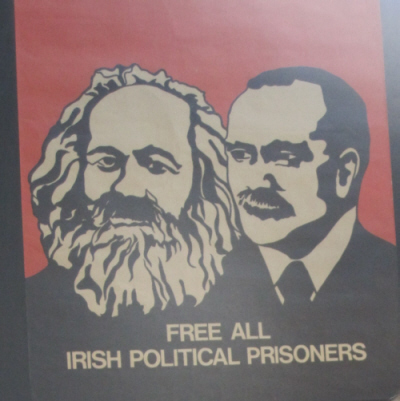