From the 1992 General Election a flyer from Fianna Fail Dublin South candidates Seamus Brennan, Tom Kitt and Ann Ormonde. On the reverse there are brief profiles of the candidates. Both Brennan and Kitt were elected.

END_OF_DOCUMENT_TOKEN_TO_BE_REPLACED

From the 2002 General Election a flyer for the Late Seamus Brennan running for Fianna Fail in Dublin South. Seamus Brennan topped the poll and was elected on the first count.
On the reverse of the leaflet are the achievements of the 1997 to 2002 Government. Amongst them ‘Ended Emigration‘ which was at the time seen as a huge achievement. Alas it appears to be back again. 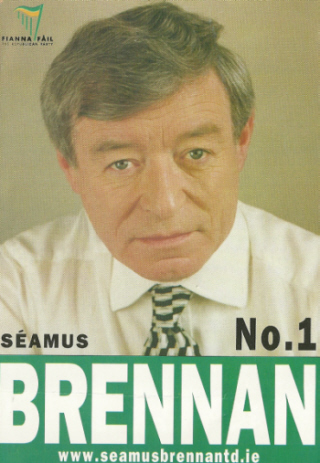 END_OF_DOCUMENT_TOKEN_TO_BE_REPLACED

A newsletter from the late Seamus Brennan from around 1998.
He mentions all sorts such as preparation for the Single Currency (The Euro), Restoration of the Peace process.
Many of you may remember the traffic chaos that was the Kocklyon area prior to the extension of the M50 from Tallaght to Dundrum.
Theres a few words there too about Knocklyon School.
Seamus Breannan is also looking for any suggestions you may have and in the course of asking for suggestions mentions his Ministerial experience! 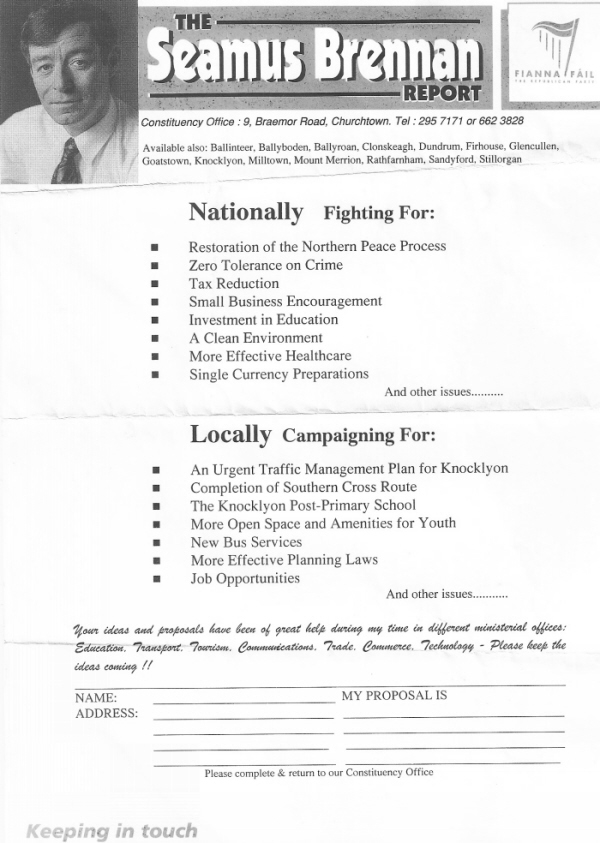 Both Seamus Brennan and Tom Kitt were elected.  Ann Ormonde failed to be elected. She was an Fianna Fail candidate four times in Dublin South, each time with no success. To cushion the blow somewhat, she has been a Senator since 1993.

Note how each candidate had separate concerns and priorities, with some in common.