Michael Healy-Raes election song, No details as to who the singer is.

From 1937 lyrics to “The Good Ship Fine Gael”An Election Ballad sung to the tune of “The Glen of Aherlow“
Many thanks to the sender.

Fianna Fail 1981 General Election song. I’m told that it was probably sung by Cathal Dunne, nephew of Jack Lynch. Cathal represented Ireland in the 1979 Eurovision. Apologies for the quality in the second half of the song especially.
Many thanks to the sender.

END_OF_DOCUMENT_TOKEN_TO_BE_REPLACED

‘Nazis are no fun’ badge from Rock Against Racism February 4, 2013

A ‘Nazis are no fun’ badge from Rock Against Racism.
Many thanks to the sender

From the mid 80s a pamphlet from Red Wedge “Fact Not Fiction Series” No. 1.
It outlines the priorities of the project which was aimed at Youth. They were training, Unemployment, Allowances, Low Pay, Gay Rights, Housing and Internationalism.
Red Wedge was a collective of artists and musicians who came together in opposition to the Conservative government of Margaret Thatcher. They worked closely with the Labour Party, organising gigs and public meetings in support of their effort to defeat Thatcher in the 1987 election.
Amongst the artists involved were Billy Bragg, The Style Council, The Communards and Jerry Dammers. Others that made guest appearances included Madness, Prefab Sprout, Tom Robinson, Lloyd Cole and The Smiths.

END_OF_DOCUMENT_TOKEN_TO_BE_REPLACED

From the 1981 General Election the Fianna Fail anthem “Arise and follow Charlie” in praise of then leader Charlie Haughey.

Hail the leader, hail the man
With Freedom’s cause it all began
With Irish Pride in every man
We’ll Rise and Follow Charlie

I received this today (many thanks) the donor notes…
“…here’s a plea to the voters of newbridge in the 2009 locals from Culture Factory who have been campaign for a dedicated creative and social centre in Newbridge, the leaflet succeeded in making youth facilities the major issue in the election and was delivered to over 8,000 homes by activists and members of the group.” 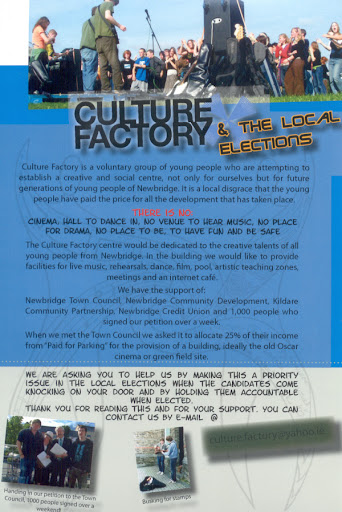