From the 1985 Local Elections a sample Ballot paper issued by Independent Fianna Fail for Letterkenny UDC. The candidates were Tadhg Culbert, James Larkin, Hugh Dorrian and Jim Lynch. (A leaflet from them with details of the candidates is posted here)
Of the other Non Party candidates Patrick J Blake, Charles Grant and Sean Maloney ran for The Community Party, whilst James Devenney ran for the Donegal Progressive Party which attracted a Protestant vote. 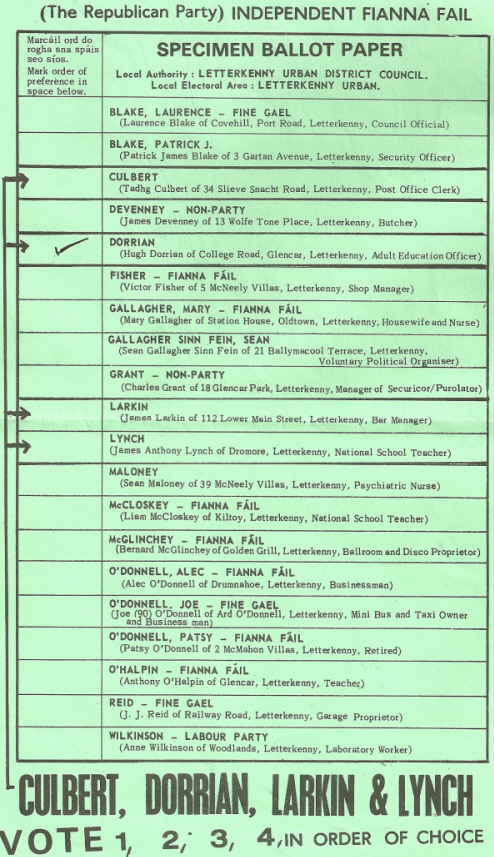 Tadhg Colbert, James Larkin, Hugh Dorrian and Jim Lynch. An Interesting bunch here. Unusual to see a candidates name have two different spellings. Tadhg Colbert on the front, Tadgh Culbert on the back. He later joined Fianna Fail and stood for them in the 1994 UDC elections.
James Larkin was Neil T Blaneys director of elections. He had also been a member of the Seanad, nominated as part of the deal for Independent Fianna Fail TD Neil T Blaney to support the 1982 Haughey government. Whilst not quite the headline grabber the Gregory deal was, this was the one and only time the Independent Fianna Fail party had a seat in the Seanad.