From the 1998 Limerick East By-Election a flyer from Democratic Left candidate John Ryan. It (and the Dublin North by Election held on the same day) was the last election fought by the Democratic Left before their merger with the Labour Party.
John Ryan polled 3,868 votes.

END_OF_DOCUMENT_TOKEN_TO_BE_REPLACED

From the 1998 Limerick East by-election ( won by Labours Jan O’Sullivan) the Fine Gael candidate, the then Senator Mary Jackman.
Mary Jackman stood for the Dail on 5 occasions but was never elected.
Pictured with Michael Noonan (who was yet to be Party Leader) most of the issues are local to Limerick. 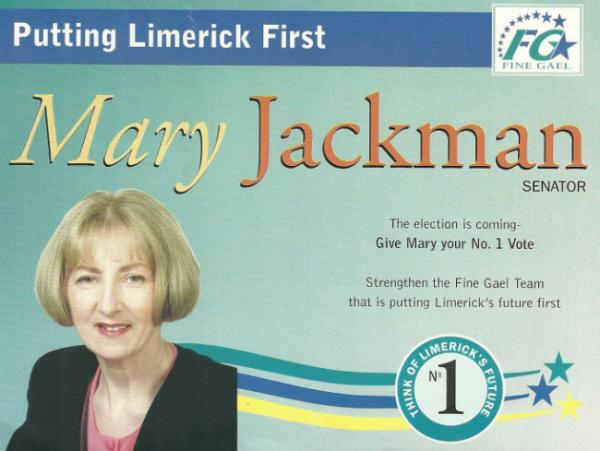 END_OF_DOCUMENT_TOKEN_TO_BE_REPLACED

Tim O’Malley’s first Dail attempt in the 1998 Limerick East By-Election , caused by the death of Jim Kemmy. In a constituency where a year earlier they had held two seats, O’Malley polled 4,287 (10%) votes.

END_OF_DOCUMENT_TOKEN_TO_BE_REPLACED

John Ryan from the 1998 Limerick East By-election (Caused by the death of Jim Kemmy). It took place on the 11th March along with the Dublin North By-election. As far as I’m aware it was the last day the name Democratic Left appeared on an Irish ballot paper.
The By-Election was won by Labours Jan O’Sullivan. Fianna Fail only got 23% of the vote.
John Ryan had been elected to Limerick Corporation in 1991 as a Workers Party candidate and there were hopes that he would build a substantial base from that.
Here we have testaments about Ryan from ‘Limerick people’ and also from the Parties top table.