From 1965 ‘Fine Gael and The Language’ some interesting proposals on the Irish Language February 12, 2013

From 1965 ‘Fine Gael and The Language’ which is very interesting in their proposals for the Irish Language. The bones of 50 years later not much of what they proposed came through.

From the 1960 Local Elections an Ad for 3 Poblacht Chríostúil candidates Padraig Griffin, Liam Hearne and Liam Jackman who were running for seats on Waterford Corporation.
Griffin polled 102 votes, Hearne 162 votes and Jackman 64 votes with none of them being elected.
The second clipping is from the 1965 General Election campaign where Sylvester Cotter and Alex Miller were running in Cork Mid and Cork City. Cotter polled 498 votes whilst Miller polled 547 votes.
This piece explains the partys policies

The aims and ideals of this Irish Christian party, as published on its membership card are:

“1. To change the present political structure from contentious government to a form of Government based on Christian Principles and Social Justice,
“2. To foster a resurgence of true patriotism by stimulating interest in public and social administration through the study and application of Christian Social Principles.
“3. To prepare candidates for local and national office who will apply these principles for the common good.
“4. To oppose all subversive influences into our Christian and National Heritage.
“5. To work towards a planned economy aimed at the full development of the country’s resources with self-sufficiency and the repopulation of the country as primary considerations.”
According to their wikipedia entry ” Senator Eoghan Harris campaigned for the party and spoke at its rallies”

END_OF_DOCUMENT_TOKEN_TO_BE_REPLACED

From the 1965 General Election a leaflet from Fianna Fail candidates Honor Crowley and Timothy ‘Chub’ O’Connor running in Kerry South. Both were elected.
The leaflet also has the Fianna Fail slogan from that election “Let Lemass Lead on”
We also have the message to the electorate from Sean Lemass. Which boasts of the progress made to date but that “Everything depends on the country’s agricultural and industrial production continuously increasing..”

END_OF_DOCUMENT_TOKEN_TO_BE_REPLACED

From the 1965 General Election a flyer for Labour candidate then Councillor Frank Cluskey. Cluskey was elected with 7,098 votes and was later to become a Minister and Leader of the Labour Party.
Some 1984 Material from Frank Cluskey

END_OF_DOCUMENT_TOKEN_TO_BE_REPLACED

From the 1965 General Election, voters are urged “Do NOT Vote Fianna Fail” by the Garda Pensioners Association. It asks for a vote for Fine Gael or Labour who had given assurances to them over Pension increases.

From the 1965 General Election campaign a flyer from Fine Gael with the message that “Fianna Fail are Rattled”. “Only This could explain their ill-informed attacks”..
Fianna Fail still won an overall majority, indeed gaining two seats on their 1961 total. 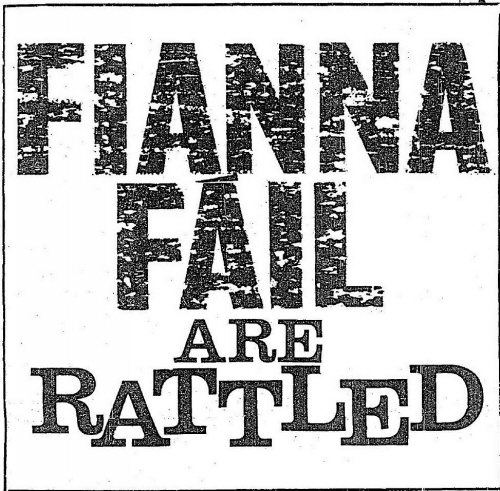 END_OF_DOCUMENT_TOKEN_TO_BE_REPLACED

From the 1965 General Election a leaflet from the Labour Party asking “Prosperity for Whom?”. Many thanks to the sender. 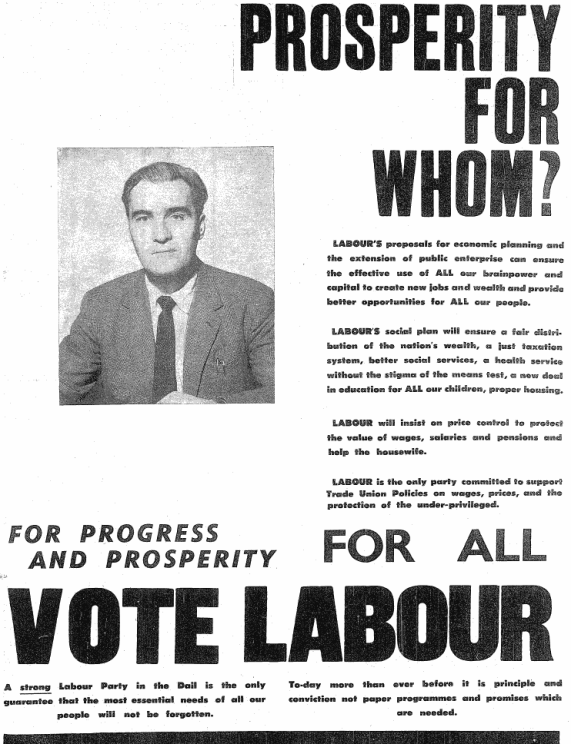