Was sent (many thanks) these pages of a 2002 Edition of The Starry Plough, the newspaper of the IRSP. It was a special edition marking the 25th Anniversary of the murder of Seamus Costello.
In this post are The cover of the paper and a very interesting page which cover many things including a profile of Seamus Costello, the foundation of the IRSP and his ultimate murder, which is uploaded in PDF HERE .
(Should anyone have any of Costellos election material. I’d love to post it)
The sender notes too that “Costello was the first (and so far only) leader of an Irish political party to be murdered.” 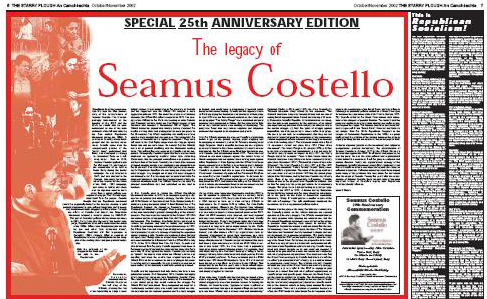