An interesting article giving a class based analysis, “The Origins of Gay and Lesbian Oppression” from the May 1993 edition of ‘Fightback’ which was produced by the Irish Workers Group student members and supporters Galway.
Many thanks to the sender

Was sent this by the candidate and thought it was quite good.

Nomination day
Thursday 3rd March, between 10 and 12, was nomination day at Trinity. After a couple of hours transcribing Roger Casement’s enormous Berlin diary in the National Library’s Manuscript Room in Kildare Street, I wandered down at 11 a.m. through the college’s Nassau Street entrance to hand in my papers.

Actually they had been posted earlier in the week for checking, and just needed my nod to be entered in the race. Or pulled.

Assentor issues
There had been something of a drama two days earlier with one of my assentors developing the notion of running himself and wanting to remove his name from the form. I had however taken the precaution of having a twelfth man, actually a lady, should any prove problematic.

I was conscious of such problems as I had previously signed up two assentors who were certain they were registered graduates only to discover they were graduates who had never registered.

END_OF_DOCUMENT_TOKEN_TO_BE_REPLACED

From the 2009 Local Elections a wonderful poster and Leaflet for Independent LGBT candidate Lisa Connell.
The “Out, Proud & Independent” slogan is excellent.
Lisa Connell polled 229 votes.
In my youth I recall Liz Noonan running on a Gay Rights platform in Dublin South East with posters pasted all around Donnybrook as I passed on the bus. She stood in 1981 and in the two 1982 elections. Lisa Connell continued that tradition.
Mamam Poulet has a fine post on Single Issue LGBT Candidates in Irish Elections.

I’d love to get any material for any of the candidates listed in Maman Poulets article. (Don Donnelly, Tonie Walsh,Michael Foley and Liz Noonan)
I’ve a 1997 John Goodwillie leaflet posted already. 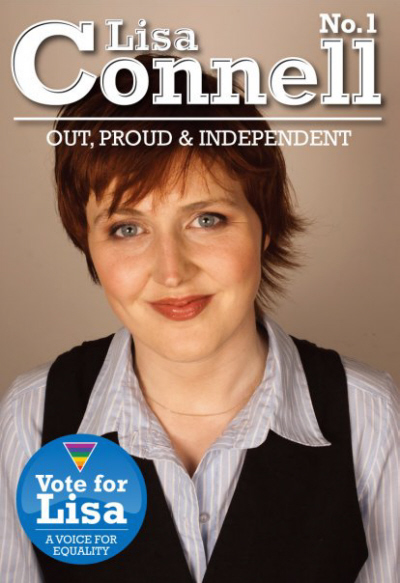