from the 2011 General Election a leaflet for Independent candidate Siobhan Roseingrave,  the sole female (Independent) candidate standing in the Wexford Constituency.

The candidate herself writes in a Biography.

Delivering Power Back to the People.

Siobhan Roseingrave is the only Female (Independent) Candidate contesting the election in the Wexford Constituency. For many years Siobhan has been concerned at the under-representation of women in the decision-making process in Ireland. With a Degree in Psychology & Philosophy, Diploma in Legal Studies and H.Dip in Mediation & Conflict Resolution, coupled with a career in Local Authority Service for over 20 years, Siobhan has the credentials for a career in politics. She co-founded the Greystones Cancer Support Group and has extensive experience working at voluntary/community level. As daughter of the late Tomás Roseingrave who was a great pioneer of community development both in Ireland and Europe, she has deep understanding of issues in both national and international political contexts.

According to Siobhan, gender equality is not a luxury, it’s a legal right which currently does not exist in Irish politics. In Ireland, 50% of the electorate (women) receive, on average, less than 20% representation. The barriers to this inequality must be removed by leveling the playing pitch to facilitate more women to join the ranks of their male colleagues, if necessary through legislation.

Since the late 1950’s the EU has promoted equality in the decision-making process but so far Ireland lags far behind, coming 23rd out of 27 EU countries in terms of gender balance representation. Only 78 women, in total, have been elected to the Dáil since 1918. This inequality must be addressed. Political Parties must ensure that more women are selected ‘on merit’ to go forward for election to the Dáil.

A hallmark of any society is demonstrated by its ability to treat the more vulnerable citizens with justice and fairness. Any newly evolving political system will only be effective if it promotes a more socially cohesive and just society for all the citizens of the Country. Irish society must be built on principles of Social Justice and Moral Integrity. If we build on these solid foundations, the behaviour of politicians, bankers and others who brought about the financial collapse of Ireland, would be constrained, regulated, and where appropriate prosecuted, in a new system of political accountability. As Jesse Jackson said on his recent visit to Dublin, ‘globalised banking and technology were not coupled with integrity and honest values’. This is what we, the people of Ireland must now demand.

This election should be based on the needs of the people and the community and how the economy services those needs, rather then the needs of the Bondholders, the ECB or the IMF. The Irish people should have a say in what model of economics they are willing to support, as well as a say in the next phase of the bailout. As David McWilliams suggests, in this unique economic crisis the people of Ireland should be entitled to a referendum, which will allow them the opportunity to decide the future of their Country.

This is probably the most important election since the foundation of the state, where the Irish Electorate can demonstrate the ability to turn the tragedy of the current economic situation into triumph through participation. By voting not as we have done in the past, and by refusing to support parties or individuals out of “traditional loyalties” rather then their worthiness “to govern”, only then can we change the whole course of political history. By delivering a strong message to all those who wrecked havoc on the people of Ireland, both those in Government as well as those who stood idly bye, we can deliver our own form of justice through the power of our vote

This is an extraordinary crisis that demands an extraordinary response by the Irish electorate, replacing top down power politics with a bottom-up (grassroots) power of local people in communities, rural and urban, right across Ireland. Only Independent Candidates, women like Siobhan, whose loyalty is to the people and not to any political party, can deliver this for you, the people of Wexford. 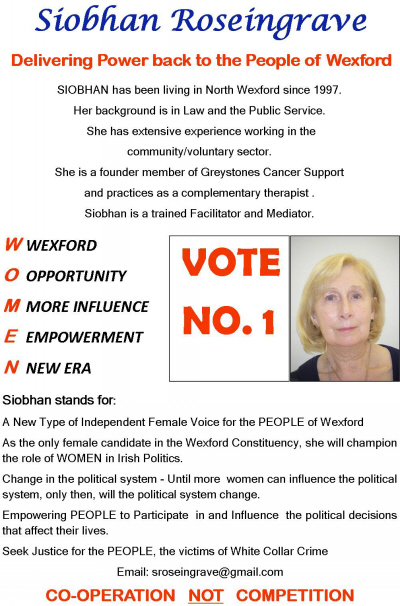 One Response to “Leaflet from Siobhan Roseingrave- Independent- Wexford”