First off, many thanks to the sender.
The poster is related to ‘The Murray Case’, where husband and wife Noel and Marie Murray were convicted of the Capital Murder of Garda Michael Reynolds in St Annes Park in 1975. As it was Capital murder both were sentenced to die by the non jury Special Criminal Court.
“A provisional date was set for their execution, and they spent several months in the uncertainty of the death-cell before their appeal resulted in a substitution of a sentence of life imprisonment. The appeal court ruled that as the Murray couple, who had been involved in a bank robbery, were not aware at the time that Guard Reynolds — who had tried to apprehend them while off duty and in plain clothes — was in fact a Garda, the question of capital murder could not arise. Thus, the death sentence was set aside in this case, before it became necessary for the Fine Gael/Labour coalition to make the final decision on the matter.
We do not know if the Cosgrave Government of the day would have allowed the hanging of the Murray husband and wife, given the strong “law and order” stance of that administration. We do know that there was strong pressure from some Garda opinion at the time which insisted that the “law be allowed to take its c o u r s e ” , while other subversive outrages at the time made it difficult for the Government to be seen to be weak.It was going to be a major test The Cosgrave Government.”
*from a Galway Advertiser article
The case was covered by the RTE programme Garda ar Lár in 2008. 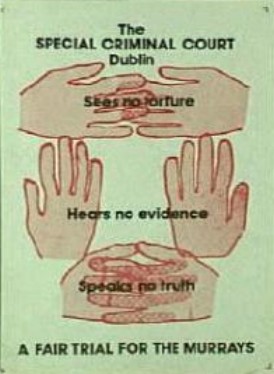