From the 1956 Kerry North Bye-Election a flyer from Fianna Fail candidate Daniel J Moloney. An unusual Slogan too in “Moloney is the word and Moloney is the man”.
The Listowel based Moloney lost out to Clann Na Poblachtas Kathleen O’Connor (Daughter of Johnny Connor whose death caused the By Election, She was 21 years, 7 months old when elected, making her the third youngest ever person elected to the Dáil after William J. Murphy and Lorcan Allen). Moloney was elected in the subsequent 1957 General Election before losing his seat in 1961. He passed away in 1963.
Many thanks to the sender. 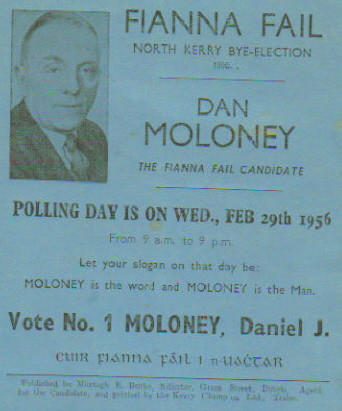