A flyer for a meeting of ‘National League United’ against the proposed move of Wimbledon FC to Dublin to become the Dublin Dons. The move was first proposed in 1996 and the idea of Dublin being home to a Premier League Soccer team appealed to many. Amongst those enthusiastic about the move were Eamon Dunphy, Paul McGuinness and Owen O’Callaghan.
A stadium in Neilstown was to be built and Shelbourne had agreed to let them play in Tolka Park whilst the ground was being built.
More information here
Many thanks to Fergus Desmond of The Shamrock Rovers Heritage Trust for the use of the image. 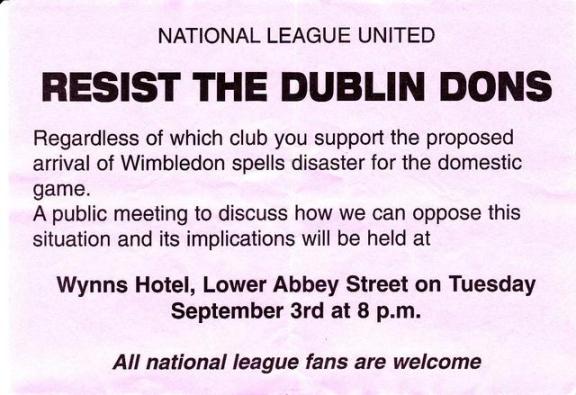 One Response to ““Resist The Dublin Dons”- Flyer for National League United meeting against move of Wimbledon to Dublin.”