Many thanks to the Sender who notes…
“John Turnly, a Protestant Nationalist who started out as a councillor for the SDLP but left to help form the short lived Irish Independence Party which gathered up a lot of hitherto unused Republican votes but were sidelined when SF came back in to the fray.
Turnley was shot dead by the UDA a year later as he went to a meeting in Carnlough, a commemoration for him is till held there annually I believe.
He was very much involved in the H-Blocks campaign during the first strike, quite something for a Protestant living in Paisley’s constituency. He represented the Glens area which covered the current Moyle DC and part of Larne DC and had a Nationalist majority.”

*apologies for the size of the text
As its an interesting leaflet I have transcribed the text beneath each image.

Irish Independence Party
JOHN TURNLY was born in 1935 in the town of Ballycastle, in fact he is the only candidate in this election born in this constituency. He now lives on the family farm at Garronpoint close to the town of Carnlough. He has traveled widely and lived for several years in Japan working with various Japanese companies and organisations. In the last election held in the Constituency of North Antrim in 1975 he was elected to the Convention.
After that body’s dissolution in 1976 he continued to serve the people of North Antrim In an unpaid capacity as a Constituency Representative. In 1977 he was returned unopposed to Larne Council and is a member of the roads sub committee and the North Eastern Group Committee Building control Service. He figured prominently in the Campaign for the ending of internment and now favours the re-introduction Political Status pending an amnesty for those imprisoned as a result of the current upheavals.
Recently elected as Vice-Chairman of the Irish Independence Party, he is a strong advocate of complete British Withdrawal.

AIMS OF THE
IRISH INDEPENDENCE PARTY
1. TO PROMOTE A JUST AND LASTING PEACE IN IRELAND.
2, TO CONVINCE PEOPLE THAT THE BRITISH PRESENCE IN IRELAND IS THE ROOT CAUSE OF OUR SOCIAL AND ECONOMIC ILLS.
3. TO SECURE BRITISH WITHDRAWAL BY NON-VIOLENT MEANS.
4. TO ENSURE A FAIR SHARE IN THE WEALTH OF IRELAND FOR ALL ITS PEOPLE

The IIP case is that while the British remain there can be no solution. There is general agreement among Non-Unionists that the British presence Is the primary cause of our problem. It is therefore illogical and dangerously misleading to say that the Britith must stay to solve the problem and then leave.
How can it make sense to ask those who are the cause of the problem to stay to resolve the problem ? We are the only Party which is facing up to the reality of our problem and demanding a British withdrawal within a set period of time.
We therefore believe we deserve your Vote 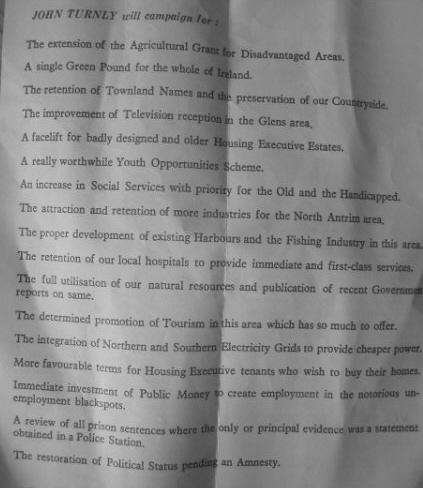 JOHN TURNLY will campaign for:

The extension of the Agricultural Grant for Disadvantaged Areas.
A single Green Pound for the whole of Ireland.
The retention of Townland Names and the preservation of our Countryside.
The improvement of Television reception in the Glens area.
A facelift for badly designed and older Housing Executive Estates
A really worthwhile Youth Opportunities Scheme.
An increase in Social Services with priority for the Old and the Handicapped.
The attraction and retention of more industries foe the North Antrim area.
The proper development of existing Harbours and the Fishing industry in this area
The retention of our local hospitals to provide immediate and first-class services.
The full utilisation of our natural resources and publication of recent Government reports on the same.
The determined promotion of Tourism his area which has so much to offer.
The integration of Northern and Southern Electricity Grids to provide cheaper Power.
More favourable terms for Housing Executive tenants who wish to buy their home.
Immediate investment of public money in create employment in the notorious un-employment blackspots.
A review of all Prison sentences where the only or principal evidence we a statement obtained at a Police Station.
The restoration of Political status pending an Amnesty.